My absolute favourite way of getting zero-waste food is foraging. I mean, for a start it’s free, but more than that, there’s a thrill to it – seeing the golden, shining cap of a chanterelle mushroom is so like finding treasure.

Aside from the usual berries and leafy weeds, Husband is a great mushroom hunter. It’s important to add here that this is absolutely not a tutorial for how to find or identify fungi. If this is something that you want to get into, you need to seek out expert guidance. In our case, though, Husband grew up with a father whose granddad was an actual Snow-White style German woodsman. I’m not even kidding. So when my father-in-law was little, he used to walk in the woods with his granddad and search for mushrooms.

Despite his life-long skill, my father-in-law still carried an identification book at all times and never ate anything he was in the slightest doubt over. Contrary to popular belief, there are few ways to go wrong with wild mushrooms, but when one does make a mistake, it’s deadly.

It just isn’t worth the risk.

Just to stress again – this isn’t a tutorial. It’s just what we do.

All that aside, as the season for mushrooming gets ever closer, I find myself getting increasingly excited and I thought I’d share one of my favourite recipes from last year, in case you’re lucky enough to find someone who knows what they’re doing.

We made what are essentially vegetarian schnitzel from the flesh of a giant puffball mushroom. I started by removing the outer layer, leaving the nice, clean centre. 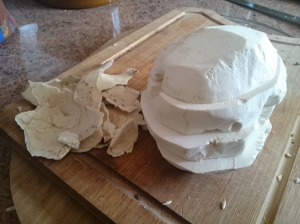 Then, I sliced it into 4 rounds.

I smashed some stale bread into crumbs…

… then turned the ‘steaks’ in a whisked egg and the crumbs. I then fried this off as I would a chicken burger – until the outside was golden-brown and crunchy.

We ate these as burger substitutes and the mushroom flesh was delicious – aromatic and light, silky but firm. It was almost like tofu, but less chewy and more flavoursome.

As the breadcrumbs are leftovers from loaves gone by, the only real cost in all of this is the egg and the spices – a definite improvement on a pack of four vegeburgers/meaty burgers.

I’ve been told that it’s getting increasingly easy to source oyster mushrooms in the supermarket, and that being the case, I can imagine that this is a great way to serve larger examples. If you can, I would defintely urge you to try it with a fungi you know is safe (though not with a Portobello mushroom – I find tey go slimey).

Do you forage? What are your favourite things to find? I’d love to try out some of your recipes. As ever, contact me here or on Twitter.