One of my absolute favourite things to make from the garden is elderflower cordial.

It’s so easy to make, and though you need to leave it to steep overnight, it’s actually incredibly quick in terms of weeks. You don’t technically need anything other than store cupboard ingredients – sugar and water, and the zest of some lemons. It does benefit from some citric acid, though. 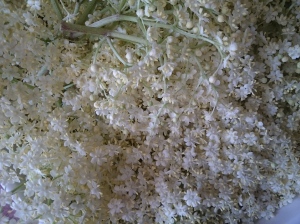 Firstly, collect a bowl of flower sprays. Pack the bowl quite tightly and let it stand for a few hours – this gives any bugs time to escape.

Once you’ve done that, break the larger stalks off and decant the flower heads into a large pan. Add the peel of some lemons – I used 4 this time, ‘zested’ using a vegetable peeler.

I tried to add the zest of some limes in too, but they were a bit old and gnarly so there’s just that solitary green scrap there…

I covered all of the ingredients in my pot with boiling water, put the lid on, and let it steep for 24 hours – a bit like a giant pot of fresh elderflower tea.

Coming back to it the next day, I put a fine metal sieve – lined with a clean cotton tea towel – over a bowl and strained yesterday’s concoction.

I was just going to pour the whole lot over, but in the end, I decided to use a slotted spoon to remove the larger sprays of elderflower.

After that, I strained what was left. This made it much easier to clean the tea-towel afterwards. 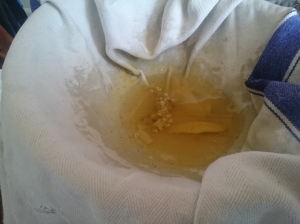 Now for the important part of the instructions – measure the volume of fluid you have left. You need to add grams of sugar equivalent to the number of mililiters in order to make the cordial. So, for example – I measured 1.6l fluid, and added 1.6kg of sugar.

I really like to use Silver Spoon sugar – we used to live near the factory in Suffolk – because it’s grown in the UK so has fewer food miles than alternatives, but as ever, that’s a personal preference.

If you’re adding citric acid to the mix – and I added around a tbsp for this quantity – then stir it through the sugar here.

Once you’ve worked out how much sugar you’ll need, add both sugar and fluid to a large pan, then heat until the sugar dissolves. Meanwhile, sterilise your bottles.*

All that’s left to do at this point is to decant the finished cordial into the bottles.

Whilst – in theory – this should last well at room temperature, I like to store it in the fridge. With most things – to my shame – I’ll just skim any mould off the top, but that isn’t possible in  a bottle like this so I tend to err on the side of caution.

Dilute to taste – I like a roughly 1:5 ratio with tap water, but you can add sparkling water instead for a bit of fizz.

Have you tried making your own cordials? I’d love to hear what kinds you’ve made! Tell me about it here, or on Twitter.

__
* There are all sorts of ways to do this. Some people like to use boiling water, others use the oven and microwave, but personally I like to use Milton cold-water steriliser or the non-branded equivalent. If I’ve got the oven on anyway, or if I’d planned on boiling the kettle, then I’m happy to do these things but you need such a small amount of the liquid steriliser and you’re not burning through power to heat things by using it, so it’s my favourite method. As with the sugar, though – it’s all just personal preference.