When I first started writing this blog, I mentioned that I’d like to reduce our waste in the bathroom.

So far, we’ve managed to make quite a few changes:
– Soap bars instead of plastic bottles
– Shampoo bars instead of the liquid alternative
– a menstrual cup instead of tampons/pads
– paper-stemmed cotton buds
– using crystal deoderant – it lasts years!
– not using seperate body wash or conditioner
– using vinegar to clean with

A lot of these alterations were driven by cost – bars of soap and shampoo last so much longer than liquid versions and the menstrual cup was a superb investment*.

I’ve used PitROK crystal deoderant for over a decade now and have only had to replace my stick once (because I lost it!) in that whole time. So, even though Boots has it sitting at £6.59, it’s definitely a worthwhile investment and saves money long-term. It does have a plastic ‘sleeve’ – for lack of a better word – but you can buy a plastic-free crystal deoderant from Salt Of The Earth. When my current PitROK stick finally runs out, I’ll be replacing it with this – it’s £4.85, so slightly cheaper. Do bear in mind, though that it’s 75g vs 100g of the PitROK.

So far, so good. Until you bear in mind that at the same time, we still use an electric toothbrush, Aldi’s own brand of dental floss and Tesco Essentials plastic-tubed toothpaste so there’s still considerable work to do.

Anyway. Going forward. What can I change?

I don’t remeber how much exactly the Aldi floss cost, and unfortunately I can’t find it online, but I did get two dispensers full in one pack and I seem to recall it costing between £1.99-£2.99 (though I could be wrong). According to MySupermarket**, expensive Oral B dental floss costs £2 for 50m at Tesco, making it 4p per metre. 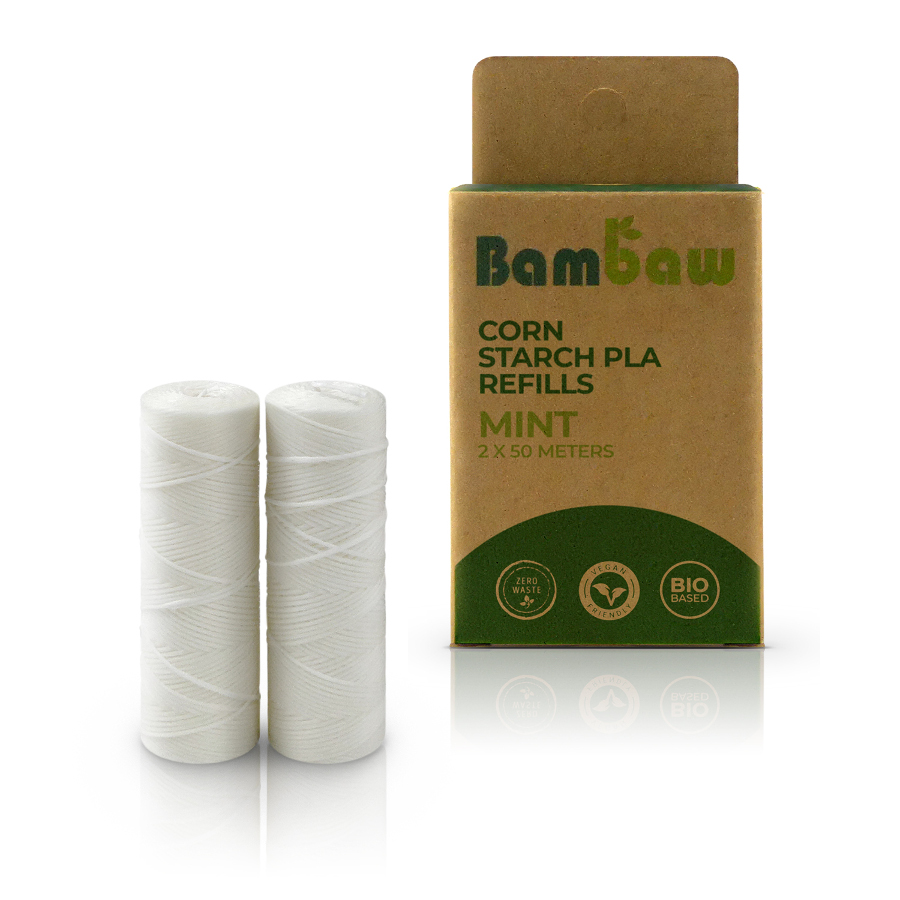 The most cost effective eco-alternative I’ve found so far is the Bambaw floss from EthicalSuperstore – it’s made from cornstarch so is suitable for vegans too. For 50m, plus the reusable dispenser, it works out at £5.75 – just under 12p per metre. The refils cost £6.79 for two rolls, so work out at just under 7p per metre – a significant saving, though still nearly double the cost of the expensive supermarket variety.

Am I going to make the switch? I feel like floss is something that I either have to spend silly money on to get an earth-friendly alternative, or something I have to find an alternative to. I’m wondering if wooden toothpicks might be able to achieve a similar thing and between now and running out of floss, I’ll be looking for some in plastic-free packaging.

Floss aside, teeth are still a big source of plastic in this house. As I stated above, toothpaste tubes and electric brush-heads are big contributors but for the moment, I don’t feel like the former is something I can change. I know, I know… there are loads of alternatives out there, but there are family members with additional sensory needs and to have finally found a toothpaste we all get along with is such a relief that I can’t begin to think of changing that. Should Tesco alter their Essentials recipe, we’ll revisit this with reusable alternatives, but for now, I can’t see that changing.

I can, however, make a compromise with the brush-heads we use. We bought the electric toothbrush as a last-ditch attempt to ensure clean-teeth in the aforementioned family member so I’m not willing to get rid of it. We’ve done our best to choose one that will last a long time – it’s a ‘cheapy’ (from a set of two) that we bought from Costco in the days when we had a membership. The batteries are just standard AA size so we can employ our rechargables here. The fact that we can remove the batteries also means that when the toothbrush finally does stop working (four years and counting so far, though – touch wood!) we can carry on using the rechargables in other things whilst we recycle the handle as a small appliance with the local council.

It’s not an ideal solution, but it’s not the worst, either. As to the brush-heads though… Until now, we’ve been bulk buying them and still have six-months worth, which we’ll use before buying more. After that, however, we’ll be trialing some LiveCoCo heads which you can return to the manufacturer for recycling. These do cost significantly more than the standard ones (£9.99 for two, direct from the manufacturer!), but I’ll be switching to a cheaper bamboo manual brush at that point in an effort to offset some of the cost. The cheap toothpaste also helps here…

So what haven’t I covered yet?

In the past, we’ve tried the Who Gives a Crap (WGAC) toilet paper and… honestly? It clogged our drain. I don’t think that’s entirely the fault of the loo roll – it’s probably a combination of things. At the same time as trying it, I tried to curb our water consumption by putting full plastic bottles in the cisterns***. On top of that, the decline from our house to the septic tank isn’t that steep so things are predisposed to getting stuck. The WGAC loo roll is great at breaking down, but as a result it did so long before it reached our tank and we were left rodding the drains on nearly a daily – and sometimes twice daily – basis. It wasn’t a sustainable way to live long term so we’ve gone back to loo roll that takes a bit longer to disintegrate. In the future, I’ll be looking to try their more expensive bamboo range, but for now that’s just not possible financially.

Generally, we’ve been selecting 3-ply packs from budget supermarkets which use FSC trees and have reyclable outer bags. Recently though, I discovered Tesco’s own-brand recycled loo roll and so far so good on that. I need to do more research regarding the use of bleach etc. but this might be the best solution for us, going forward.

Cosmetics can be a big producer of waste – both in terms of plastic, unused products, and unwanted gifts. I don’t personally wear make-up, but I do appreciate a good flanel to wash my face at night. Back in the days when I could muster enough energy to paint my face, I found that the terry cloth of the towel was better than any brand of wipe, so I purchased a pack of small terry nappies. After children, they were purloined for their proper purpose, but I’m still partial to a flanel. Being a knitter/crocheter, I’ve seen a lot of really great, free patterns out there for washable wipes and it’s worth checking through the Ravelry archives. This is the one I often make to gift, and I’m super-impressed by this alternative shower-scrubbie.

I think the final thing of note might be razors. My husband stopped shaving many, many, pre-me years ago and I’m still working my way through the razor heads he bought for his Gilette during this time. Obviously, the most eco-friendly thing to do in regards to body-hair is not to shave, but for my own reasons, this isn’t an option for me.

Lots of people have written extensively about the advantages of safety razors over disposable/mixed-material reusables and I’d urge you to read some of their articles about life with one, as I still need to try one for myself. One of the main ideas is that being made primarily from metal, there are few ways for the razor handle to break, the blade is easily changed, is metal only so can be recycled and comes in much less packaging than the mixed-material alternatives.

So after all that text, is there anything you can see that I’ve missed out? I’d love to hear some of your tips for going low-waste in the bathroom – why don’t you come join me on Twitter?

*I do realise that not everyone is comfortable with the idea of menstrual cups but there are other reusable menstrual products out there – washable pads, period-panties, natural sponges etc – as well as disposable products which don’t contain plastic, or reusable applicators for conventional tampons.  If you’re interested in learning more, the Sustainable(ish) Podcast covers the topic of periods on three seperate episodes.

**Correct at time of publication.

***Using full plastic bottles is generally considered better practise than putting a brick in the cistern – the bottles doesn’t break down and wreck your pipes over time. Don’t learn this the hard way. Student landlords aren’t especially lenient…

5 Replies to “In the bathroom – a big, long, text-heavy post”